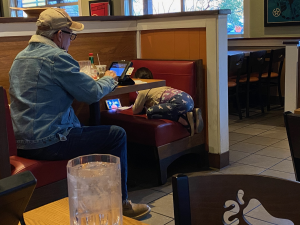 While dining at a restaurant in Arizona recently, I noticed a young girl who couldn’t have been older than five having dinner with a man who appeared to be her grandfather. She spent the entire time they were there glued to her ipad; it was as if he didn’t exist. Only once did she talk to him, and then it was only to show him what she was watching. His body language and facial expressions told a story of confusion, silent pleading, and awkward loneliness.

I could tell he wanted her to say something, anything. It didn’t happen. When I shot this picture it was when he was paying, right before they left. She barely acknowledged him as they exited.

Many of God’s people are like that little girl, barely acknowledging the Lord’s existence as He waits patiently for them to put their phones down.

One recent survey showed that Americans are spending 4-1/2 hours a day on their smartphones, and that may be an understatement. Another survey puts daily smartphone use at 5.4 hours. Smartphones have become a relationship killer. That becomes dangerous when the relationship you’re messing up is with the King of the Universe who demands first place in our lives.

As for what was sown among thorns, this is the one who hears the word, but the cares of the world and the deceitfulness of riches choke the word, and it proves unfruitful.
Matthew 13:22

Consider Instagram’s implementation of a variable-ratio reward schedule. As explained in this 60 Minutes interview, Instagram’s notification algorithms will sometimes withhold “likes” on your photos to deliver them in larger bursts. So when you make your post, you may be disappointed to find less responses than you expected, only to receive them in a larger bunch later on. Your dopamine centers have been primed by those initial negative outcomes to respond robustly to the sudden influx of social appraisal. This use of a variable reward schedule takes advantage of our dopamine-driven desire for social validation, and it optimizes the balance of negative and positive feedback signals until we’ve become habitual users.

The subtle danger of smartphone addiction is that it spiritually numbs those are caught up in it. This can have eternal implications.

If you’re one of those who are addicted to smartphones, let me ask you, how’s your prayer life? What does your relationship with the Lord look like? From talking to others who are addicted to their hand-held black box, I see many who are leading choked, fruitless lives. Even worse, they ignore God just as the girl in the picture above did.

There are two sides to this coin. The first is that God is like the grandfather, patiently waiting for His children to come to Him. The opposite side is that those who are lukewarm or barely acknowledge His presence disgust Him to the point of expulsion:

“‘I know your works: you are neither cold nor hot. Would that you were either cold or hot!  So, because you are lukewarm, and neither hot nor cold, I will spit you out of my mouth.  For you say, I am rich, I have prospered, and I need nothing, not realizing that you are wretched, pitiable, poor, blind, and naked.  I counsel you to buy from me gold refined by fire, so that you may be rich, and white garments so that you may clothe yourself and the shame of your nakedness may not be seen, and salve to anoint your eyes, so that you may see. Those whom I love, I reprove and discipline, so be zealous and repent.
Revelations 3:15-19

These are strong words, but there’s a lot at stake. We all need a hard message from time to time to shock us out of a state of malaise and open our eyes to what we’ve been doing to ourselves. We have just one shot at this life. Make it count.

The good news is that God offers a remedy to the lukewarm – be zealous and repent. The classic Christian excuse, “I’ll pray about it,” won’t cut it. Being zealous involves action and change. Let me leave you with a few action steps to consider.

* The smartphone has no place at the dinner table, which is about relationships. This goes double if you’re out with a loved one.
* The smartphone must never take precedence over people. If you’re talking with someone, put it down.
* Your smartphone shouldn’t be the first thing you reach for when you wake up. Begin your day talking to God, not checking texts.
* Smartphones do not belong in prayer closets. If you’re reading your Bible in the morning and your smartphone is next to it with notifications firing, you’re wasting your time. Turn it off or wait until you’re willing to.
* Smartphones don’t belong in the bedroom. If your spouse is ready to go for it in bed and you’re putting them off as you sit there in a daze checking texts, emails, or notifications, you need your head examined.
* Remove all social media aps from your phone. Using them only on a desktop will blunt the temptation to check for notifications every five minutes.
* Work diligently at restoring your first love with the God who has been waiting for you. Start with an hour of prayer and then make it a daily habit. A fervent prayer life super-charges your hunger for God while simultaneously decreasing your lust for the things of this world.