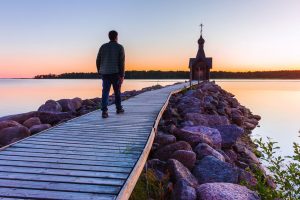 God sent Jonah to the city of Ninevah to warn them of impending judgment if they didn’t turn from their sin and evil. After trying to bail out on God’s assignment, Jonah went, reluctantly, and hit them with a message that was brutal and bereft of compassion: “Yet 40 days and Ninevah shall be overthrown!” (Jonah 3:4). Sheesh, he could have set it up with “God has a wonderful plan for your life if you turn to Him” to soften the blow. Yet amazingly this shock treatment triggered one of the greatest revivals in history.

What would it be like if God sent a tough old testament prophet like Jonah today with the same message?

On a hot summer day, God sets Jonah down on the beach where he is immediately confronted with more exposed skin than he would have encountered in his time. Seeing so many women wearing little more than string is a shock to his system, and impels Jonah to cry out “In 40 days this country will be destroyed!” Several people glance his way; he’s largely ignored by the beach crowd. Just another homeless guy ranting.

Jonah makes his way into the city. He’s been commanded to walk by as many churches he can with his message in the hope of provoking repentance and prayer from God’s people.

Jonah’s words are raw and untamed. As he moves from church to church, Jonah uses phrases such as “hypocrites,” “fat cows of bashan,” (Amos 4:1), “lukewarm,” “arrogant,” “sexually immoral,” and “brood of vipers.” As Elijah taunted the prophets of Ball, Jonah taunts them for their lack of fire and their passive, choked lives. He even goes so far as to talk about “smearing crap on pastor’s faces” as Malachi did.

Jonah is bewildered about how everyone is so busy, always in a mad dash to get to the next place and distracted with that small black thing they’re so obsessed with. He doesn’t understand why people can’t slow down… and, why aren’t they spending time in prayer in their church meetings?

At the end of the first week, word has spread quickly that a homeless guy’s running around shouting crazy things at churches. Social media and Youtube light up with pictures and videos of Jonah sightings.

Jonah’s harsh words are like coarse sandpaper scraping a baby’s skin to the gentle, hyper-sensitive ears of many Christians, and they attack him for being too mean to be taken seriously. Surely a loving God wouldn’t send a prophet to say such unkind words, especially not to their church. Fierce debates spring up everywhere on social media and the blog universe as people cross swords on how offensive Jonah is.

Some churches launch a four-week series to teach their way verse-by-verse through the book of Jonah. One week for every chapter, of course. Once their flocks have the right theological grasp on their teaching all should be well and people can relax. No need to get carried away with this repentance thing. Sackcloth and ashes and crying out to God is for sinners, not sophisticated, Biblically correct churchgoers of the 21st century.

The Christian commercial machine fires up to capitalize on the moment, pumping out DVDs, Books, and study guides on Jonah. Several churches host “Jonah and 40 days of Judgment” conferences. Participants get an autographed book by the author and a free piece of authentic sackcloth.

Amidst all this chaos—and God’s people missing the point—there are glimmers of hope. Clusters of small churches begin putting their people on their knees in beseeching prayer. They set aside their normal order of services and decide to take the same action steps the Ninevites did, to call out to God for mercy and face and confess their sins to each other. There is little in the way of sermons and no worship band to warm up the faithful. They set everything aside to go after God hard.

Their weekend services are transformed to prayer meetings, with time for individual sharing and prayer in small groups woven in. They invite God to convict them and their country of their sin, and, as Daniel did in Daniel 9, they confess the “open shame” of the sin their country and the church has brazenly and openly embraced. They ask God to provoke pastors everywhere to put their people on their knees before it’s too late. This they do, every weekend.

The late Vance Havner once said that if we have revival it won’t be due to large modern churches, but because “a small church in the country was on their knees storming the throneroom of Heaven.”

Such a church would be a rogue church in today’s culture.

Does the leadership in your church have the courage to turn their weekend services into prayer meetings? Or would they be of those who merely study and teach God’s word as opposed to having the courage to lead their flock in doing what Scripture says?

And the people of Nineveh believed God. They called for a fast and put on sackcloth, from the greatest of them to the least of them. The word reached the king of Nineveh, and he arose from his throne, removed his robe, covered himself with sackcloth, and sat in ashes. And he issued a proclamation and published through Nineveh, “By the decree of the king and his nobles: Let neither man nor beast, herd nor flock, taste anything. Let them not feed or drink water, but let man and beast be covered with sackcloth, and let them call out mightily to God. Let everyone turn from his evil way and from the violence that is in his hands. Who knows? God may turn and relent and turn from his fierce anger, so that we may not perish.” When God saw what they did, how they turned from their evil way, God relented of the disaster that he had said he would do to them, and he did not do it.
Jonah 3:5-10

With where we are today it appears the countdown to destruction as begun. Whether it’s 40 days or 40 months no one knows. Until we have the same sense of urgency the king of Ninevah had, the downward spiral will continue to accelerate.